When I turned 18, I gave up on God. Suddenly Krishna, Jesus, Allah and all the others started making no sense to me at all. Everything starting from a holy figure to an angry devil that God was all about just seemed bullshit to me. Every fear, every belief and every other thing that God was to me shattered like a lego house. As you may ask, Why? Betrayal dude, betrayal. I was made to believe that ask from GOD, work hard for it and give your everything to it is what was required for your dreams to become reality. The people who taught me this were wrong. Then I was introduced to the notorious Law of Attraction and so-called ‘The secret’ by Rhonda Byrne. It became my new God and I gave myself away to it, completely. Once again I was betrayed. That law has worked for some people and not for others. What kind of law is a ‘law’ that requires specific people or conditions to be applied to. And I ain’t talking about a single instance. Millions of people were left stranded in the middle of nowhere while that law promised to take them places.

After these two turbulent storms, a great personality and a guy who gave motivational and self-helping seminars came into my life. I followed that good man like a mad-fan and honestly, he has had a great impact on my mind, on my personality and the way I am right now , none of which I regret. But sometime later, this river dried up as well for me. The guy remained amazing but I reached a state where I could figure out what he will be saying or explaining. The maze that I was stuck in and the kind of freaky mind that I was dealing with had the tendency to sublimate every substantial thing that I hold onto. I tried finding something that applies everywhere, every time and could take me anywhere. There wasn’t a lack of knowledge or wisdom, but clearly of something else. 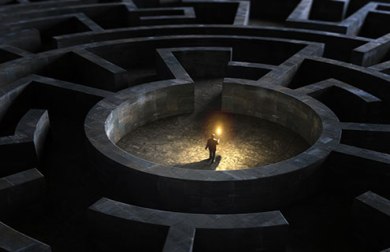 And over another heated conversation about life and stuff between three freaks, I realized what had happened. I figured out what had handicapped me to such an extent that now the norm of new foundation gave me goosebumps. Betrayal. People get robbed of their precious stuff, money, loved ones… and stuff like this. But I was robbed of myself, not one or two but freaking three times. The whole foundation of faith on which I based my life ‘three times’ gave up on me and went down in dirt. Motivation and inspiration don’t work now because it’s like you’re cheered to run but you don’t have legs.

Then I felt what I feels like to kill somebody without even touching him. I knew what it feels like to live with three dinosaur-sized holes in you. Honestly, I have been to be one of the most hard-core man when it comes to life values. But the values that I once fought for left me right in the middle of that war. Who do I have to blame? Obviously me. Because I had stopped believing in conventional God whom you can blame for your failures. Nothing remains true forever because nothing is forever. Not me, neither my values.

That was when it dawned on me how a fall of one’s faith can be destructive. The person is robbed of everything he has ever believed in and it becomes hard for him to believe in anything else ever again. It’s like his life force sucked out of all at once. In my case, over all the odds or evens I once again retired to that dark corner, now a familiar place for me, to introspect once again where did I go wrong. And the answer is everything in between nowhere and everywhere. Once again, being forced to accept limitations of me and my mind and maybe… maybe finally bowing my head down after three hard blows.